Growing up near Disneyland

When I told my colleagues at work last week that I was going to Disneyland, I got one of two reactions: some people got excited and a bit jealous and immediately started asking about details and the rest of them gave me kind of a puzzled look (like, really, you’re going to spend a lot of money and a whole day at a Disney park?). From casual surveys of people I have determined that people fall into these two groups based almost entirely on their proximity to Disneyland when they were growing up.

Growing up in LA, my family (and here I’ll be talking specifically about my mom’s side of the family – her and her five brothers and sisters) used to go to Disneyland on a nearly annual basis. I have lots of pictures of me as a kid at Disneyland. My brother and I would look forward to Disneyland Day more than anything else and the anticipation when that magical day neared was on par (or better) than Christmas morning. So many good childhood memories are tied up in Disneyland. 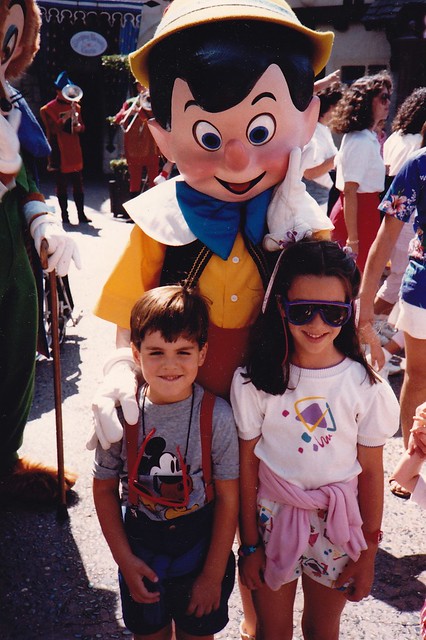 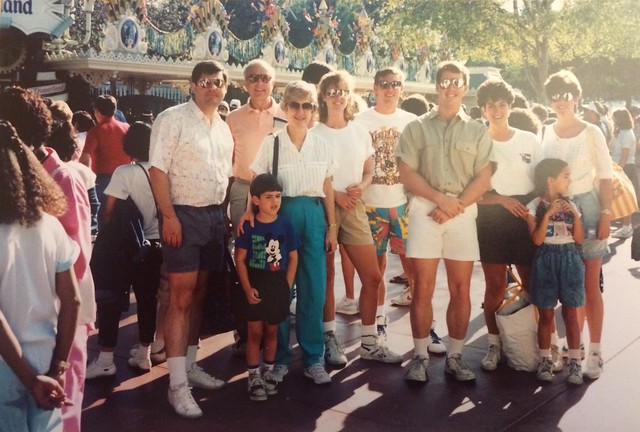 We always had so much fun there. Everyone, from my grandpa to my aunts and uncles, down to my cousins would all find something to love and enjoy whenever we went. It was a space that allowed us to be silly and sing pirate songs loudly in public and scream at the top of our lungs on the scarier rides.

The four of us (me, my brother Anthony, and my cousins Rosemarie and Lizzie) had been talking about just us going to Disneyland together for a long time. For multiple reasons, mostly due to me not living nearby until sort-of recently and everyone’s schedules not lining up when I’m normally in town, it took a really long time to make this happen. Basically, I finally just decided to email everyone and make a special trip down to SoCal to get it scheduled. And so we all congregated in Anaheim yesterday.

We started the day with Star Tours, which is pretty typical for us. Then Rosemarie and Lizzie showed up, we got FastPasses for Space Mountain, and then we all got in line for the Matterhorn. We picked the left side, of course, because that side is way better than the right side (yes, there is a difference – the ride is completely different). 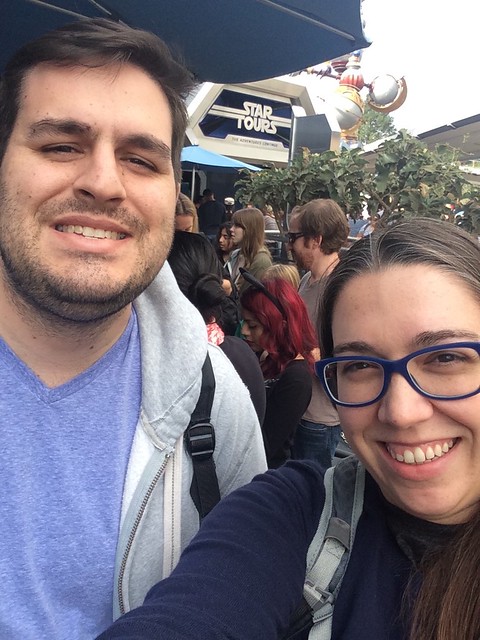 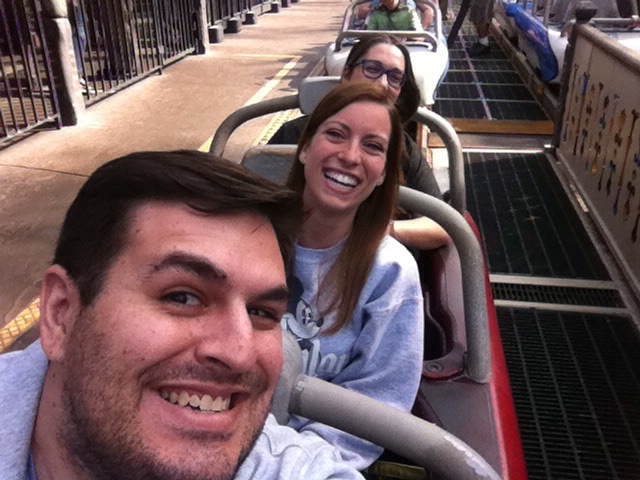 Then we took a spin on the teacups next door and headed over to the other side of the park to wait for our time for Space Mountain. 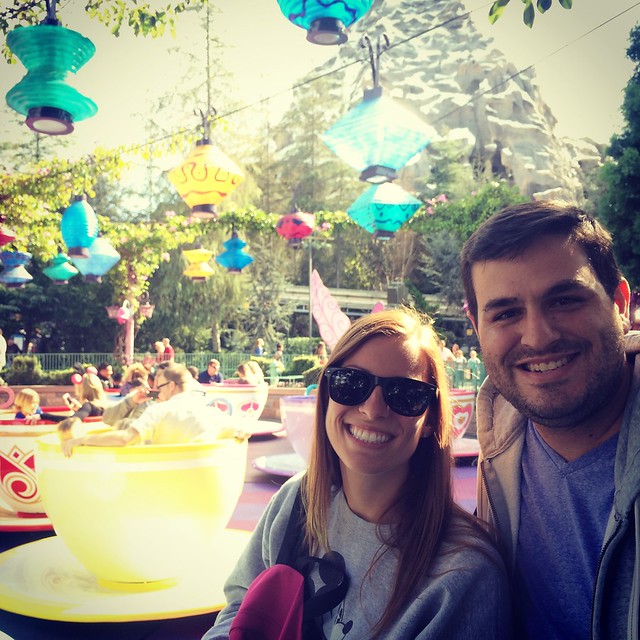 We started with the Winnie the Pooh ride because the line was really short and Anthony hadn’t ever been on it. Splash Mountain was temporarily closed so Lizzie and I were a little sad, but then it re-opened when we were in line for Winnie the Pooh and had to make a quick decision. We decided to stay in line and then check Splash after the ride, which worked out pretty well. Anthony and Rosemarie got some churros and Lizzie and I went on Splash Mountain (only a 20 minute wait!). We sat in the front and both (especially Lizzie) got completely drenched. Oh well. It was worth it.

By then it was time to go back to Space Mountain so we headed over there. The ride was awesome, as usual. I almost bought an Ewok hat, but decided it was too small for my head. :( 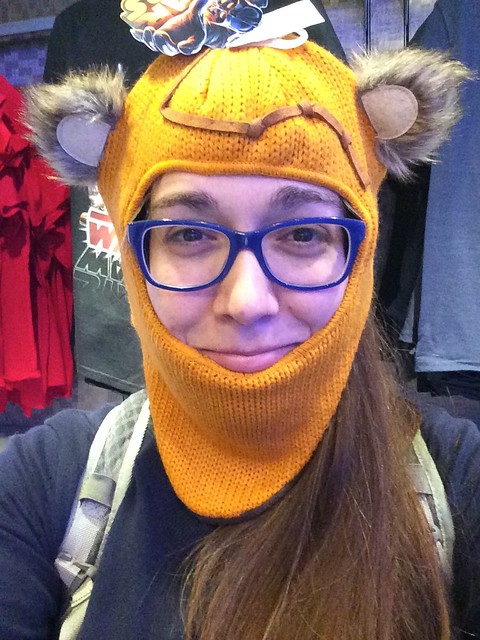 Then we switched parks and went to California Adventure. First on the list was to get a FastPass for Tower of Terror. Then we went on the Ladybug ride in the Bug’s Life area, got margaritas, and then waited in line for the Ferris Wheel. I hadn’t been on the Ferris Wheel before, and we sat in the swinging gondolas and it was awesome. We made sure Anthony sat on the side with the barf bag and the three of us girls sat on the super swingy side.

Then we went on California Screaming, got Fast Passes for another ride later, and then went on Tower of Terror. Anthony’s face in the picture pretty much sums it up: 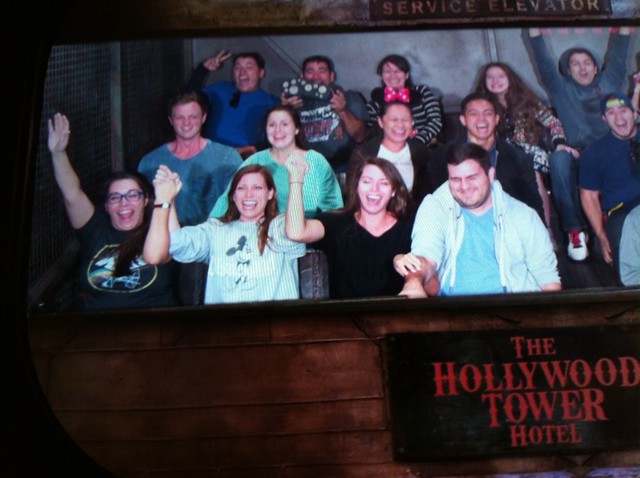 Then we went on the Little Mermaid ride and sang very loudly, did California Screaming again, went on the swings, and then Goofy’s Sky School. That last one is a surprisingly scary ride, mostly because you feel like you are going to be flung off the track at every single turn. Then we headed over to Cars land and Mater’s Junkyard Jamboree, and went on Soarin’ Over California with some FastPasses. Then it was time for dinner so we headed over to Downtown Disney (through the Grand Californian) and had some tasty food outside the park for a bit of a break. 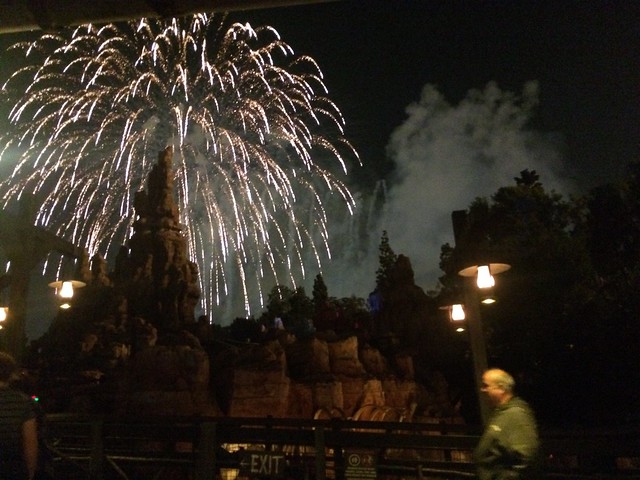 Then we took the Monorail back to Disneyland, went on the Jungle Cruise, Big Thunder Mountain (and watched the fireworks show from the line), and Indiana Jones (using the Single Rider line). We ended the night with Dumbo, the Carousel, and finally Astro Blasters where Anthony totally schooled us all. By then it was around 11pm and our feet just couldn’t handle any more. 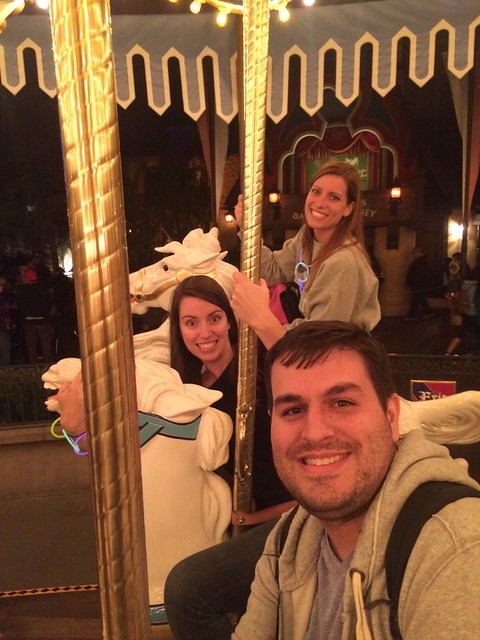 It was such a great day and I know the four of us will remember it for a very long time. 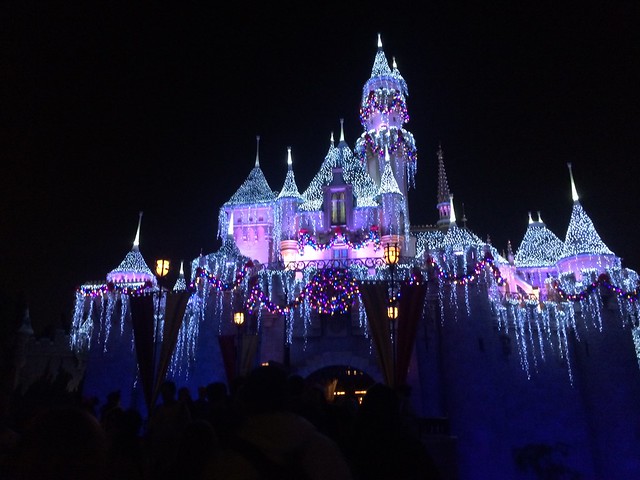