I grew up in LA. My family still lives there, with my immediate family in the San Fernando Valley and the extended part of my mom’s side of the family mostly lives nearby-ish. So, I drive to LA (and back) a few times a year to see them. I’ve gotten really good at the drive and have seemingly mastered the 5-6 hour snooze fest that is typical of driving through California’s central valley (and before that, the big desert between Arizona and California).

Driving on the 5 is pretty easy. It’s pretty straight, simple two lanes each direction, with occasional rest stops, gas stations, and even an In-n-Out halfway between LA and the Bay Area. It’s boring. There’s not a lot to see except for agriculture and cows1. So, doing the drive for 5-6 hours, especially by yourself like I normally do, requires a certain amount of preparation, Zen-like patience (for when there is traffic), and an ability to amuse yourself when needed.

For me, preparing to do this drive requires a couple of important things: an audio plan and a food/drink plan. The audio plan is most important. I try to listen to my local NPR station for as long as I can leaving the Bay Area. This gets me to somewhere on the Pacheco Pass, where I need to switch over to a pre-planned set of CDs or podcasts. Yes, I still listen to CDs in my car because it is old and won’t bluetooth to my iPhone. So sad. Anyway, you will need at least 4 hours worth of music or podcasts to listen to. I usually prefer to listen to at least one or two musicals because I love singing loudly in the car and driving by myself for 5 hours is the perfect time to do this. Recent musicals in my rotation are: The Book of Mormon and Company. I’ve also been listening to Into the Woods a bunch lately because of the upcoming movie.

Today I wasn’t really in a musical mood, so I caught up on some podcasts. Podcasts are perfect for this kind of driving because they’re just stimulating enough so you aren’t tempted to not pay attention to what you’re supposed to be doing (aka driving).

The food/drink plan is a bit trickier. First you need to decide about caffeine. I prefer coffee as my caffeine-delivery system so I always make some coffee in the morning before I go and caffeinate as per usual. A rookie mistake would be to over-caffeinate on a boring drive, but then you’ll just have to adjust your bathroom plan and that needs to coincide with your overall plan (and rest stop availability) so it isn’t a good idea. Extra water is also always a good idea (just like in life in general). Sometimes I stop and buy food halfway to LA, but lately I’ve been just bringing food with me and stopping at the halfway-point rest stop. This is way easier (especially when I bring my dog with me like I usually do) and a lot faster, especially when it’s a busy travel day. So you need to plan a lunch or whatever of some sort that is easily portable and can be eaten at the rest stop. Today, the choice was leftover pizza (yum) and an apple.

Usually this isn’t too bad. But, today, as is well known, is one of the busiest travel days of the year2 and so there was traffic. Well, sort of. I left just about when I wanted to this morning and everything was going well for a while. There were more cars on the road, but surprisingly there were very few people driving like jerks. So I was making really good time, considering it was the day before Thanksgiving. When I got to Valenica, I ran into some traffic. I didn’t think much of it at first because it normally slows down there. But today there was actually a brushfire on the side of the freeway and they had blocked off a lane or two to work on it, so it was actually pretty bad.

And if you don’t understand traffic in LA, let me just say that I traveled a total of 4 miles and it took about 55 minutes. Sadly, this is not the worst traffic I have ever been in in LA. But it was up there for sure. Luckily I knew what was causing the slow down (thanks Dad!) so I could approach the situation with the appropriate amount of Zen-like patience that is absolutely required when you’ve already been driving for 5 hours and you realize that you will be stuck in your car going less than 5 mph for the foreseeable future. That takes some training. Also, it helps if you have someone to talk to on the phone. Dogs turn out to be a) not great conversationalists and b) not as good at being patient in horrible traffic.

I got to LA finally. My mom and I made a quick trip to the grocery store to get some supplies for tomorrow and then we took Laika for a walk. We climbed up a little hill by our house to watch the sunset. It was really nice. And then a police helicopter showed up and had their searchlight focused on a house a block away. So, yeah. That’s LA. 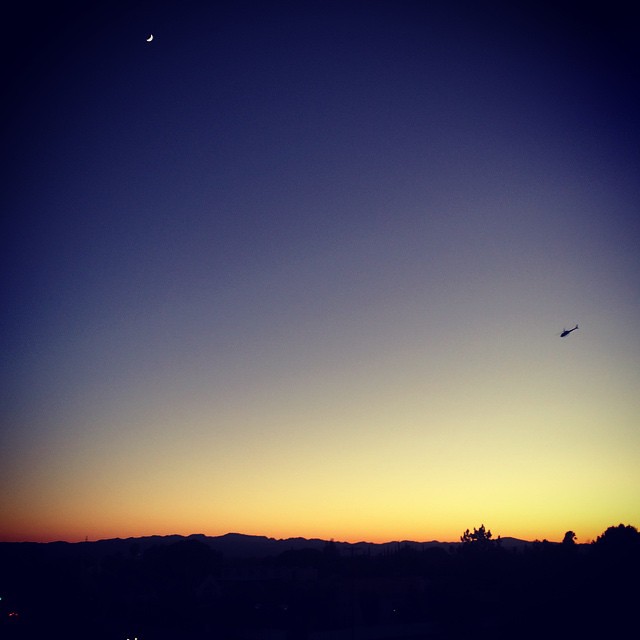